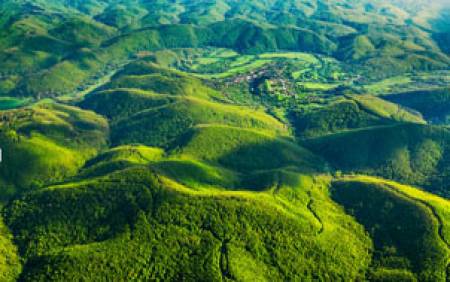 Strandja Nature Park is the largest protected area in Bulgaria and occupies an area of ​​1161 square meters. km. It is located in the southeastern part of the country, as in the south its border coincides with the political border Bulgaria - Turkey, and in the east it reaches the Black Sea coast. The nature park is located on the territory of the Strandja mountain, which occupies territories from Bulgaria and Turkey.

There are five nature reserves, 14 protected areas and 8 natural landmarks on the territory of the park.

In Strandja there are interesting species of animals and plants left over from past geological epochs - relics. There are 64 relict species on the territory of the park, seven of which are found only in Strandja from all over Europe. Only here on the continent are the typical forests of the late Tertiary preserved (about 1.8 million years ago). Deciduous forests cover about 80% of the park's territory, and their average age is higher than that of the trees in the rest of the country. Strandja Park is the Bulgarian protected area with the most vertebrates and vertebrates - 413 species. Of the invertebrates, 600 species have been identified. Nearly 70 species of fish inhabit the coastal waters of the nature park, and 42 are freshwater species.

The migration route of the birds - "Via Pontica" passes through the coastal areas of Strandja Park. Millions of birds pass through this air corridor every year to replace their breeding grounds in Northern Europe with their winter refuges in Africa.

Near the village of Stoilovo is the historical area Petrova Niva, associated with the Ilinden Uprising (the culmination of the national liberation struggle of the Macedonian and Thracian Bulgarians against the Ottoman rule). Tourists can visit the monument-memorial, built in memory of those killed during the uprising, the museum exhibition and the chapel-ossuary "St. Petka".

Near the town of Malko Tarnovo, in the area of ​​Mishkova Niva, there is an important Thracian domed tomb. The visit to the tomb takes place after a preliminary call to the Tourist Information Center of Malko Tarnovo, as the area is located in the border area with Turkey. A guide is provided by the information center.

The villages on the territory of Strandja have preserved their architecture and offer accommodation in small family hotels. There are campsites on the Black Sea coast, the preferred places for tent camps are the valleys of the rivers Veleka and Mladezhka. In the town of Malko Tarnovo and in the village of Gramatikovo there are two visitor information centers, which offer information about tourist routes, accommodation, liaise with local guides and tourists.