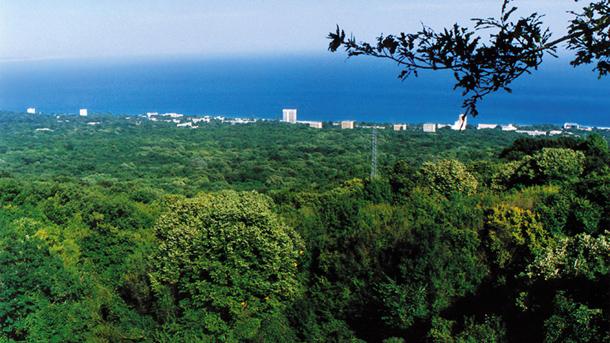 Golden Sands Nature Park is located 17 km northeast of Varna. It is located parallel to the beach and surrounds the eponymous resort. To the north the park borders with the village of Kranevo, to the west with agricultural lands, to the east with the road Varna - Kranevo, and to the south with lands from the forest and agricultural fund. The idea for the creation of the park was laid down in 1915, but it became a reality only on February 3, 1943, when with Decree No. 2134 of the Council of Ministers part of the State Forest "Hachuka" with an area of ​​2.4 sq. km was declared the Golden Sands National Park - the second declared in the country after the National Park (now a natural park) Vitosha (1934). The purpose of the park is to preserve and protect valuable plant and animal communities and characteristic landscapes.

Geologically, the Golden Sands National Park, located on the Frangen Plateau, is considered part of the structure of the Danube Plain. During the Quaternary, the repeated rhythmic rises in the range of the Frangen Plateau were accompanied by sinkings within the Black Sea Basin. Limestones form the surface and the rock crown of the Frangen plateau. The entire horizontal layer is characterized by a weak clay solder, which is the reason for its insignificant stability. As a result, conditions have been created for the formation of faults, cracks and landslides. The alternation of water-permeable karstic limestones and sandstones, with water-impermeable clays and marls, determines several aquifers and the active manifestation of landslides on the eastern slope of the Frangen plateau. The waters of both horizons are drained in the landslide terrains, as the main deposits of groundwater are concentrated between elevations of 50 and 125 m. Modern active landslide processes are influenced by the level of groundwater at a depth of 10 m. This level is highest in spring and lowest in autumn.